personal collection of objects and materials taken from different exhibitions of other artists – arranged in living/working studio for a guided tour. this photo-story is published on the platform for presenting artists and documenting their work in Q21 residency.

it is fragmented photo-story about the project “Archiving Artistic Anxieties” – based on referencing – and can be told in 8 minutes:

“8 minutes of speech is 1040 words, according to the online convertor. I read this text with a stopwatch and it seams that I am talking faster than what is considered to be average speed of the reading – I did 1120 words in 8 minutes. I have just used 45 words and less than half of a minute to illustrate that particular frame of a presentation is a condition that I take into a consideration for my artistic activity.
And for the rest 7 minutes, I can only promise the experience impossible to reproduce again in any other moment in time.
The photos you can see here are taken on the location of the potential crime scene for the investigation case. This said, the mystery already started and the story is now situated in certain space, which is my room in the residency.
An incident for rising action of the story:
Shortly after my arrival at the residency, I discovered the text written on a mirror. It was a call for help of an artist left powerless when facing today’s art system: 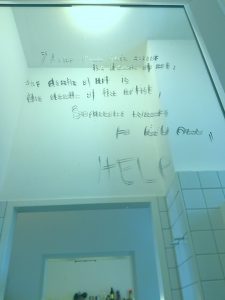 Description of the characters:
Mostly occupied researching the examples of different artistic practices that are found in the periphery of art history that are usually dismissed on its importance for their legendary and anecdotal character, I – Adrijana, decided to be in the following story an eccentric, amateur detective. In mystery crime stories, this detective generally has nothing material to gain from solving the crime and this fits so well with the role of artists, as seen from the perspective of society.
Therefore when Adrijana saw this message, she was guided only by a personal motivation and a desire to help.

The massage on the mirror says that artist was asking for a help. Adrijana had to find who would have motivation and profit of the death of art, who are them who talk about it and this will take us closer to find out who is this artist and what was she or he doing that put her or him in danger?
She thought it is kinda strange. Who announces the death of the art if not the artist herself or himself? Who are these others? The institution, curators, critics, academics, collectors, dealers, the public. People with jobs in art?

Also, I have to say, she had moments of doubting to take part, reading this message as one of varied strategies of myth making common to the art field, that has as its sole intention the speculation of value.

Looking more carefully around the room, she has found herself surrounded with evidences… 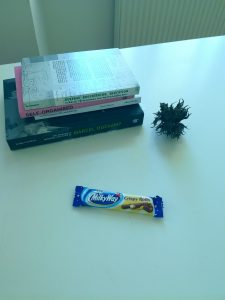 The Milky way chocolate bar comes from the box of them exhibited on a pedestal that is marked with the label NO. Only one person is invited to enter the room and interacts with the artwork. Tricky! Alone in a room, with no one watching, somebody made choices to intrude and disrupt the space. This led Adrijana to the conclusion that maybe the artist that asked for help doesn’t follow the protocols.
She was also thinking about chocolate that is chocolate and a sculpture of a chocolate is a sculpture but it’s not a chocolate.

Same goes for those bubble gums that are not chewed. 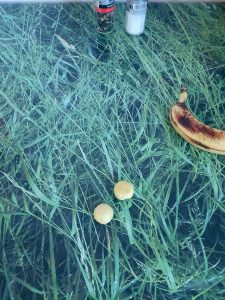 This chewing gum is taken from one of 10 vending machines designed to measure happiness. Marked with 1 for miserable until 10 for ecstatic. Maybe the artist that asked for help was miserable and ecstatic in the same time? If she would know the level of happiness, could this help her to measure a success of the artist? And if artist is not professionally successful does it mean that she or he doesn’t love to do art? Or she or he just didn’t have luck.

In some languages, like in Adrijana’s language or German being happy and being lucky are expressed in one word. In English there are synonyms for happy as an adjective characterised by good fortune: lucky, fortunate and providential.
Adrijana’s artistic way of thinking, which is in this story also a detective ability, led her to conclusion that the death of the art is connected with the belief in luck. Luck is a quality shared by random, unintended or unpredictable events or a luck is the cause of events of chance and hazard. Luckiness is also a success attained as a result of chance.
If there is a belief in good or bad luck, there is a belief in irrational influences on it, and there is a practice based on such a belief – a superstition!

She couldn’t find out how happy artist was, but she found “Hater Blocker Contact Lenses” on the sink, that have protective charms. They resemble nazars (from the Arabic word for sight or seeing) and are used against the ‘evil eye’. And evil is in the eyes of The Other. 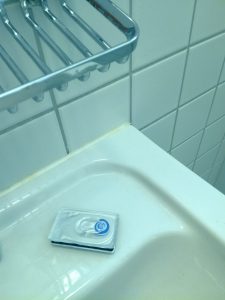 Now we are sure that the artist was training her or his mind for happiness or luck and trying to protect herself or himself from the evil.

In stories, there are three believable motives to commit a crime of killing another person: greed, survival and revenge. In art world these three we could translate into: creating value, branding and institutionalising. In relation to this, there are some evidences found that imitate money and speculate about the value. Art is a visual allegory, a metaphor, a ‘vision.’ It is a proposition, not an expression of truth. As a money is a metaphor for value. 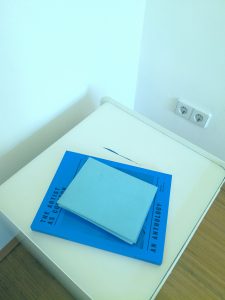 She found out that you can take one of those from the exhibition and become a collector.
As clouds in trousers, artists are trying to regulate boundless artistic freedom, give structure to work, set of rules, listings, manifestos. Is it a seduction, just a feeling of being in control? Or a key for success? Or just a consequence of precarious existence, lacking in predictability, job security, material or psychological welfare. Did artists first branded themselves then became precariat or precarity was branded? 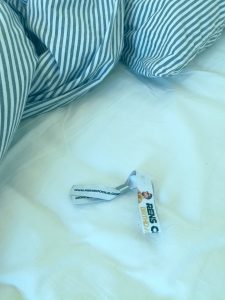 Or it’s all only for fun? Party people! 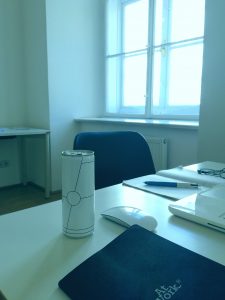 The artist that asked for help busted her or his energy with “No Bull Premium Taurine” an evidence that she or he used the strategy of re-appropriation, cannibalisation of a dominant structure by eating it, digesting it and excreting it in an entirely new form. 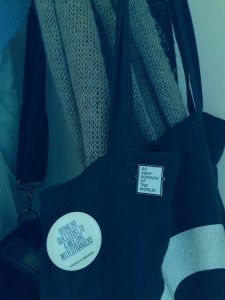 These two badges prove that artist that asked for help thinks that in art there has to be seriousness and wit, aesthetic and political engagement, inventive resistance to architecture as monumentality and other symbols of the State. All this is part of artist’s uncompromising commitment.

Resolution: TO DENY THAT WHICH IS, AND EXPLORE THAT WHICH IS NOT.
Artist has been all the time within ourselves alone.”

(some references and further reading in order of appearing: Mladen Stilinović’s sentence/work/statement, 1977; Milky Way chocolate from the work One on One by Hans Peter Feldmann, from the exhibition Ways of Seeing, Villa Empain, Brussels, 2017; a book Self-Organised, Stine Hebert and Anne Szefer Karlsen (eds.), Open edition, 2013; a book Reverse Engineering Education: In Dance, Choreography and Performing Arts, Ulrike Melzwig, Marten Spangberg, Nina Thielicke (eds.), 2005; two yellow bubble gums from the work Measure of Happiness, from the exhibition How happy are you, by Stefan Sagmeister, MAK Vienna, winter 2015; contact lenses Evil Eye Hater Blocker, by Yngve Holen, bought in the Berlin Biennale, 2016; a coin One danae, by Vadim Zakharov, picked up from the Russian Pavilion and a bill Sorry picked from the exhibition Paradiso Lussemburgo by Filip Markiewicz, in Venice Biennale, 2013; a book The Artist as Curator: an Anthology, edited by Elena Filipovic, Mousse publishing, 2017; entrance bracelet for Rens Cool’s Birthday Bash; a can from No bUll PRemiUm TAURiNe, by Pieterjan Ginckels, from the exhibition Eating Each Other in ExtraCity, Antwerp – got it for my birthday, 2017; two badges, one from Jimmie Durham’s exhibition A Matter of Life and Death and Singing in MHKA, Antwerp, 2012 and another Go Away sorrow of the world, by F&R R&F – Nel Verbeke’s donation for the Archive of Artistic Anxieties; …)